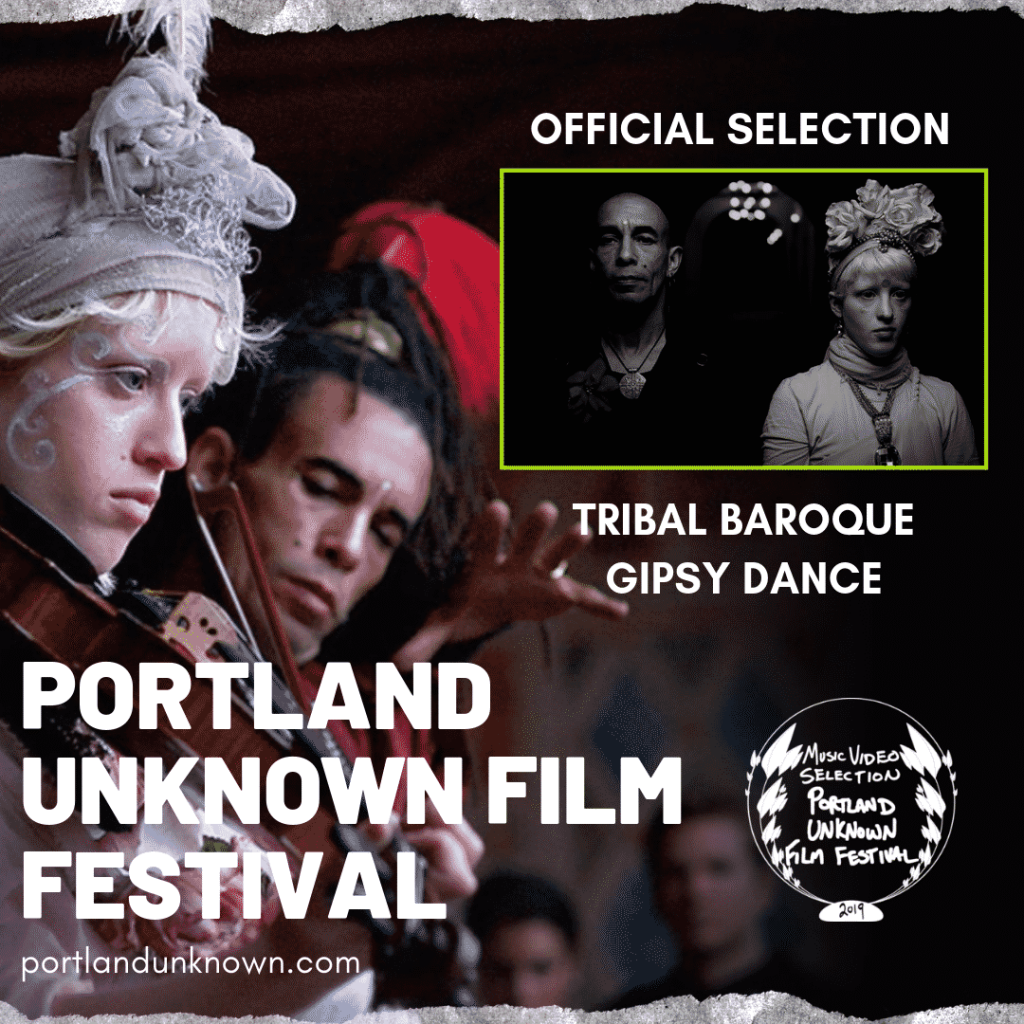 Our Music Video Tribal Baroque: Gipsy Dance has been selected for the Portland Unknown Film Festival and will be screened in Portland, Oregon from May 11th till May 13th.

ABOUT THE PORTLAND UNKNOWN FILM FESTIVAL

Our goal is to curate a gallery of film for the underground, under-known, rough and raw filmmaker. Low Budget, analog format, top priority. The Portland Unknown Film Festival is here to showcase films from the deepest depths of filmmaking and jump-start the future of cinema.
​
Your goal is to bring us into worlds we've never seen before. Take us on a lucid dream through your mind. Teach us something new. Show us the light. Make us go, "Huh?"

On May 11th, 12th and 13th in 2019, the Portland Unknown Film Festival will continue to shake the foundation of contemporary filmmaking by uprooting the norms and defying convention. The festival will consist of multiple film sessions including a rowdy micro-short "Fingertips Festival" of films 5 minutes or less.

​Submit today! Unveil your experiments and alternate realities to us!

S.K. Thoth was born into a musical and medical family. His mother was tympanist for the New York City Opera, and his father was a doctor. He started playing the piano at 7 and the violin at 8. His violin teachers were Mara Dvonch, Harry Glickman, and David Schneider. At 17, S.K. graduated La Guardia High School of Music and Art and moved to San Francisco with his mother who got a job with the San Francisco Symphony Orchestra. S.K. attended San Francisco State University where he majored in music but ended up with a B.A. in Comparative Literature. In 1987, he began busking under the name S.K. Thoth. In 1991, he formed a band called “THOTH” with Michael Chiaravelotti.

With various musicians including Scott Kungha Drengsen, Boris Goldman, and Rhan Wilson, they recorded three CD’s. After the band dissolved in 1998, Thoth began performing solo and created an original epic opera, “THE HERMA: The Life and Land of Nular-in” based on a mythical land called the Festad which he has been writing about since a child. In 1999, he moved to NYC where he continued writing and performing the opera at the Bethesda Terrace Arcade, a place he dubbed the Angel Tunnel. He claims that “THE HERMA” is the first new opera of the millennium having been created and recorded from 1999-2002. In 2001, director Sarah Kernochan made a documentary short about his life called “THOTH” which won the 2002 Academy Award.

Thoth likes cooking, dancing, drawing, sculpting digital 3D models, computers, Web design, and he is currently writing a mystery novel based in a music conservatory. He and Lila got married in 2014.

Lila’Angelique or Lila was born in New York City. Her mother sang on Broadway, and her father runs a professional recording studio. She began studying classical violin and voice from the age of 7.

She studied voice intensively under Elizabeth Carter, a former “Queen of the Night” at the Met. Well known for her unusually high register, LA landed a paid soprano position in her church choir when she was 17.  She was featured in many solos, including the top soprano in Allegri Miserere. Briefly attending University of Kentucky to study opera, she performed the lead in several shows, including Amahl in Amahl and the Night Visitors and Ariel in The Tempest.

LA has been traveling with Thoth and studying his unique violin and prayformance method for over 9 years. They got married in 2014. She loves drawing, painting, making costumes, doing make-up and being creative in general.

HONORABLE MENTION AT THE AUDIENCE AWARDS